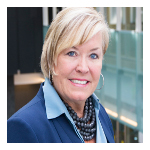 In this talk, Sherry Shannon-Vanstone will speak to the tools that she has used in successfully selling information security, from setting up distribution channels in Asia Pacific, …to standardizing, patenting, and commercializing Elliptic Curve Cryptography… to secure vehicle to vehicle communications and smart cities.

Prior to joining TrustPoint Innovation, Sherry held executive positions in several companies including, MasterCard International where she was Vice President, Electronic Commerce and led a team that developed and deployed secure solutions for both business-to-consumer and business-to-business Internet commerce.

Sherry is currently the co-chair of the Perimeter Institute’s Emmy Noether Council, promoting girls and women in physics and mathematics. She is a member of the board of directors for several private and public companies and associations including the Automotive Parts Manufacturer’s Association (APMA) and is on Communitech’s SME advisory group and Canada’s Open Data Exchange advisory board. She holds a Master of Science degree in mathematics from the University of Tennessee and was a cryptologic mathematician with the United States Government.

Light reception to follow after the lecture in QNC1102.